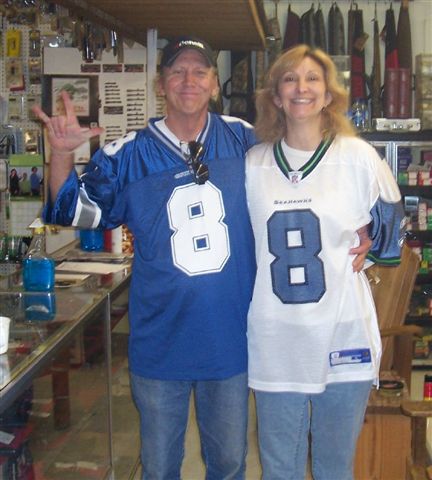 Who said the Loser Bowl?

I knew she was doing that but Cowboy fans have more class than Seahawk fans.

Well now, that game is over and both those teams have fallen.  We heard Tony Romo tried to commit suicide but he fumbled the knife. Who said that?  That's not funny.

Now I hear we have this new coach, Wade Phillips.  Now I can remember his old man, Bum, when he coached Earl Campbell and the Houston Oilers. He was a hell of a coach, got more than 100% out of all his players. And they would have gone to the Super Bowl too except for Terry Bradshaw and the steel curtain.  We hated Terry Bradshaw back then. Later, we found out he was a good ole boy from Louisiana and we kinda forgave him. But back then it hurt a lot when everybody was playing their heart out and they couldn't quite beat Pittsburgh.

So if he is as good as his old man, he will make a fine coach for the Cowboys.  And we can be proud of America's team again.  Go boys.